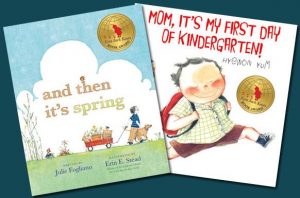 NEW YORK—March 4, 2013—The Ezra Jack Keats Foundation in partnership with the de Grummond Children’s Literature Collection at The University of Southern Mississippi announced today the winners of the 27th annual Ezra Jack Keats New Writer and New Illustrator Book Awards. The 2013 awards ceremony will be held on April 11th during The University of Southern Mississippi’s Fay B. Kaigler Children’s Book Festival. The winners will receive a gold medallion as well as an honorarium of $1,000. Wendell Minor, a noted children’s book illustrator who has worked with, among others, Charlotte Zolotow, Buzz Aldrin and Diane Siebert, will be guest presenter.

“The Book Award was created to bring attention and recognition to new artists who carry on in the spirit of Keats,” said Deborah Pope, Executive Director of the Ezra Jack Keats Foundation. “The jury looks for new books of beauty that portray the universal qualities of childhood, a strong and supportive family and the multicultural nature of our world.”

“The Ezra Jack Keats Book Award is an exciting extension of our work as guardians of important children’s literature,” said Ellen Ruffin, Curator of the de Grummond Children’s Literature Collection. “Ezra’s legacy lives on in the offerings of these fine new authors and illustrators, whose own books may one day join Ezra’s in the de Grummond Collection.”

First-time author Fogliano shares the excitement that goes hand in hand with planting the first seeds of spring. After months of snow, a boy and his dog agree that enough is enough, and decide to plant a garden. They dig, plant, play and wait…and wait…until at long last, shades of green begin to replace the brown. Spring is in the air!

And Then It’s Spring is illustrated by Erin E. Stead.

Says Fogliano, “I was struggling to find an idea for a children’s book, and a friend challenged me by asking me to create a thought of the day for him for every day of the year to get inspired. On day 156, I was in my yard and, even though it was April, there was no sign of grass growing anywhere. Suddenly, inspiration struck… And Then It’s Spring‛grew’ from there.”

First day of kindergarten jitters may be nothing new, but in Yum’s book, it’s a parent who is frantic and needs reassuring! Playfully using color and size (Mom and son take turns appearing small and blue-tinted; large and rosy pink), this author-illustrator captures the emotional highs and lows of both parent and child around this milestone.

“My book is based on a true story,” said Yum, who wrote and illustrated her book. “My son was going off to kindergarten and I was a new mommy. I felt like the five-year-old—he wasn’t afraid, but I was nervous. I thought it was better to draw what we were feeling, so I drew the mom in the book small and blue at first and the son large and rosy. Their colors and sizes change as they each get more and less brave throughout the day. My own son said, ‛Mom, that’s not how you are!’ He didn’t even notice how nervous I was.”

To be eligible for the 2013 Ezra Jack Keats Book Award, the author and/or illustrator will have no more than three children’s picture books published prior to the year under consideration.

The de Grummond Children’s Literature Collection at The University of Southern Mississippi is one of North America’s leading research centers in the field of children’s literature. The Collection holds the original manuscripts and illustrations of more than 1,300 authors and illustrators, as well as 180,000+ mostly American and British published books dating back to 1530. Since 1985, the de Grummond Collection has been the home of the Ezra Jack Keats Archive, which includes manuscripts, typescripts, sketches, dummies, illustrations and proofs for Ezra Jack Keats’ books.