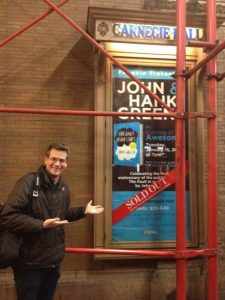 “The evening was part rock concert, part author and literary reading, and part talk show…The surprise guest of the evening was Neil Gaiman. The award-winning author of The Graveyard Book (HarperCollins, 2008), participated in the Q&A portion of the evening, asking John Green such questions and queries as “Where do people go when they die?” (“Narnia,” interjected Hank) and “Describe yourself in three words,” to which John finally agreed on Handsome, Awesome, and Tall—after some prompting from Hank, Neil, and the audience.”