Submissions Open Through January 31 for the 2013 Bull-Bransom Award 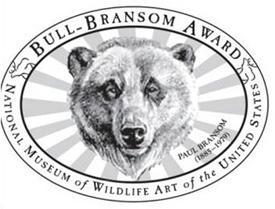 Jackson Hole, Wyoming – January 9, 2013 – Submissions are still being accepted through January 31 for the 2013 Bull-Bransom Award for artistic excellence in wildlife illustration for children’s books, to be announced Friday, May 3, 2013, at the National Museum of Wildlife Art in Jackson Hole, Wyo.  Past winners Sylvia Long (2012) and Kevin Waldron (2011) will serve on the jury for the 2013 award, which is given to a children’s book illustrator living in North America for a book published during the previous calendar year. Details on submitting a book for this year’s award are available here.

“We so enjoy giving this award, which honors one illustrator’s ability to connect children with nature through art – which is also part of our ongoing mission here at the museum,” says Ponteir Sackrey, the museum’s director of development and marketing.  “We look forward to this opportunity to honor a truly noteworthy book each year, and our Celebration of Young Artists event, with many local children present, is a fun venue for making the announcement.”

The judging committee, which includes National Museum of Wildlife Art Curator of Art and Research Adam Duncan Harris, the previous Bull-Bransom award winners and others, will announce five finalists for the award on February 15, and the winner will be invited to Jackson Hole for the museum’s Celebration of Young Artists event and 2013 Bull-Bransom Award announcement and presentation on May 3.

Created in the tradition of such prestigious children’s book illustrator honors as the Caldecott, Coretta Scott King and Hans Christian Andersen awards, the Bull-Bransom Award is presented in the form of a medal and $5,000 cash award.  The National Museum of Wildlife Art named the award for Charles Livingston Bull and Paul Bransom, among the first American artist-illustrators to specialize in wildlife subjects.

A member of the Museums West consortium and accredited by the American Association of Museums, the museum, officially designated the National Museum of Wildlife Art of the United States by an act of Congress in 2008, provides an exciting calendar of exhibitions from its permanent collection and changing exhibitions from around the globe.  A complete schedule of exhibitions and events is available online at www.wildlifeart.org.  The museum is also active on Facebook and on Twitter at @WildlifeArtJH.