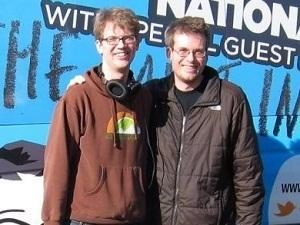 Limited tickets available for “John and Hank Green: A Rehearsal of Awesome”

New York, NY (January 4, 2013) – Penguin Young Readers Group and Housing Works are pleased to announce a duet of warm-up events on Monday, January 14 in anticipation of “John and Hank Green: An Evening of Awesome” at Carnegie Hall the following night. This series of events are in support of the anniversary of John Green’s #1 New York Times bestselling novel The Fault in Our Stars.

A limited number of tickets are available for “John and Hank Green: A Rehearsal of Awesome,” with all proceeds going to Housing Works, a non-profit organization whose mission is to end the dual crises of homelessness and AIDS through relentless advocacy, the provision of lifesaving services, and entrepreneurial businesses that sustain their efforts. The shows will take place at 11:30 amand 3:00 pm respectively at the Housing Works Bookstore Café (126 Crosby Street, New York, NY) on Monday, January 14th.

These rehearsals precede “John and Hank Green: An Evening of Awesome,” taking place on Tuesday, January 15th at Carnegie Hall’s Stern Auditorium, with special guests the Mountain Goats. This sold out event occurs one year after the release of the #1 New York Times bestselling novel The Fault in Our Stars (Dutton) and will include special guests, musical performances, and more.

The Fault in Our Stars debuted at #1 on the New York Times bestseller list following its release on January 10, 2012. It has remained in the top 10 for 44 consecutive weeks, with more than 950,000 copies currently in print. Named TIME Magazine’s  #1 Fiction Book of 2012, the novel has been included in ‘best of’ lists from Entertainment Weekly, The New York Times, O, The Oprah Magazine, The Wall Street Journal, ScrippsHoward, Huffington Post,Atlantic Wire, GoodReads, Kirkus, BookPage, Booklist, School Library Journal, and Publishers Weekly.

“John and Hank Green: An Evening of Awesome” will be live streamed via the Vlogbrothers YouTube channel so that fans across the country can enjoy what will be a Nerdfighter variety hour and celebration of this vibrant community.

Richard Peck, Patricia Polacco, and dozens of other popular authors.

Penguin Young Readers Group is also the proud publisher of perennial brand franchises such as The Little Engine That Could, the Nancy Drew and Hardy Boys series, Peter Rabbit, Spot, the Classic Winnie the Pooh, The Very Hungry Caterpillar, Strega Nona, Madeline, Mad Libs, Alex Rider, the Rangers Apprentice, Skippyjon Jones, Flower Fairies, and Pippi Longstocking, among many others.

Housing Works Bookstore Cafe is one of downtown New York’s most vital cultural institutions, presenting an eclectic mix of events — from readings and concerts to comedy nights and storytelling competitions – featuring many of today’s most exciting artists. The bookstore is staffed almost entirely by volunteers and 100 percent of its profits go to Housing Works, Inc., which provides housing, healthcare, job training, and advocacy for New Yorkers living with HIV/AIDS. As an independent cultural center, it offers patrons a unique opportunity to join the fight against AIDS and homelessness simply by buying or donating books; eating at our cafe; coming to concerts, readings, and special events; or volunteering on our staff.