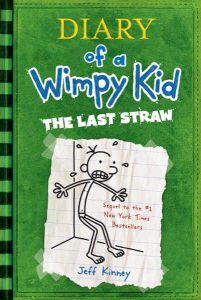 THE TEACHER-RECOMMENDED EREADING APP FROM SCHOLASTIC

NEW YORK, NY – October 15, 2012 – Scholastic (NASDAQ: SCHL), the global children’s publishing, education and media company, today announced an agreement with Abrams Publishing to offer the full backlist and new titles of the blockbuster children’s bestselling Diary of a Wimpy Kid series on Storia®, the teacher-recommended eReading app for kids.  The first six books can be purchased through Storia® and Scholastic Book Clubs beginning on October 30th, 2012.  The 7th title, Diary of a Wimpy Kid, The Third Wheel, will be available for simultaneous release with the hardcover on November 13, 2012.

Available for free download on PC and iPad (and this fall on Android tablets and smartphones), the Storia eReading app is designed to captivate kids while helping them become better readers. Storia comes with five FREE titles to sample and offers more than 2,000 titles for kids from toddlers through teens, about 350 of which are enriched with vocabulary and comprehension activities and video. Storia has been recognized by Warren Buckleitner with the Editor’s Choice Award for children’s eBook apps in Children’s Technology Review, and received glowing reviews in The New York Times and School Library Journal.

“Diary of a Wimpy Kid has been a runaway bestseller in Scholastic Book Clubs and Scholastic Book Fairs for years and we are thrilled to be able to now offer these kids’ must-reads as ebooks on Storia,” said Jenny Frost, SVP, ePublisher and eBook Strategy, Scholastic Book Clubs and eCommerce. “November 13th will be a big day in schools nationwide as kids clamor for the newest Wimpy Kid title and we will be there for them with the touch of a button to download Diary of a Wimpy Kid, The Third Wheel on the digital device of their choice.”

“It was important to Jeff and to Abrams that our Wimpy Kid e-books offer the same visual experience as the print books,” said Michael Jacobs, President and CEO of Abrams. “We are pleased that our respective digital teams worked together to faithfully reproduce the print books’ familiar diary layout and illustrations in e-book format. We know readers will also enjoy the additional digital enhancements.”

The Diary of a Wimpy Kid ebooks will be sold through Storia for $7.99. Scholastic is currently working with several other top publishers to offer their front- and backlist titles on Storia. For more information about Scholastic, visit our media room at http://mediaroom.scholastic.com. The online press kit for Storia is available at: http://mediaroom.scholastic.com/storia.