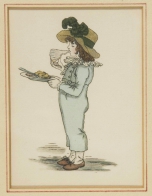 The “Lullaby and Goodnight” exhibition will focus on three trailblazers of early children’s literature: Kate Greenaway (1846–1901); Mary Dow Brine (1836–1925); and Eulalie Osgood Grover (1873–1958); and feature nearly 20 books by the authors, vintage dolls, and other ephemera.

“As an aspect of the Aesthetic movement, children’s books were part of a broad social effort to instill an early appreciation of beauty and, in turn, improve the character of children. While today the thrust of books for children—primers, fables, and nursery rhymes—is about literacy, the charming characters, captivating plots and whimsical prose of late 19th-century children’s books were instruments in spreading […] beauty.”