Home > The Forbes Galleries and Carle… 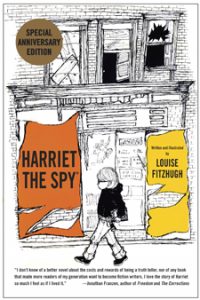 To honor the 50th anniversary of Louise Fitzhugh’s classic, The Forbes Galleries and the Eric Carle Museum will each host Harriet the Spy Turns Fifty, an exhibition centered around the original art in the book. The show first premiered at The Forbes Galleries in New York in early March, where it will stay until May 3rd. On May 20, it will open at the Carle museum.

Works exhibited will include: Fitzhugh’s illustrations, the watercolor of Harriet’s favorite tomato sandwich, and letters about the book’s creative process between Fitzhugh and her publisher, Ursula Nordstrom.