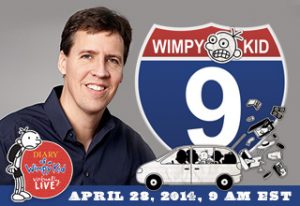 This April marks the first-ever annual Wimpy Kid Month, a month-long celebration of Jeff Kinney’s wildly popular series. The campaign will finish on April 28 with a grand reveal of the cover, color, and title of the ninth book in the series, to be published November 4.

Wimpy Kid Month events will include appearances by Kinney as well as retail promotions and authorless events in bookstores across the country. On April 6, the author will speak in Amherst, Mass, at the Eric Carle Museum of Picture Book Art. On April 27 he will appear as part of the Lowell Lecture Series at the Boston Public Library.