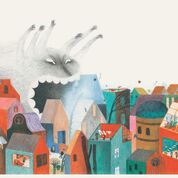 Created by the Bologna Children’s Book Fair in 1967, the Bologna Illustrators Exhibition offers illustrators from all over the world a unique opportunity to display their talent to key players in the sector who come to Bologna every year for the most important trade show for the exchange of copyrights for children’s literature. An authoritative international jury consisting of publishers, artists and museum directors selects established artists and emerging talents. The second edition is organized by Columbia College Chicago, in partnership with the Bologna Children’s Book Fair and the Italian Trade Agency.

The Bologna Illustrator Exhibition 2017 will be once again a pivotal experience for the Illustration students at Columbia College Chicago who study in a nationally renowned illustration program. This exhibition and competition is a result of a collaboration by almost all of the 150 undergraduate students and over a dozen teachers that constitute the Illustration Program.