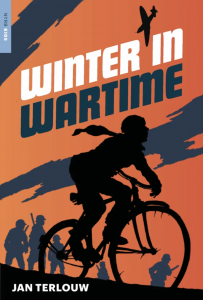 It’s the winter of 1944-45, and Michiel’s country has been at war since he was eleven. Now he’s fifteen, and his country is under Nazi occupation, including the town where Michiel lives and where his father is the mayor. No longer able to attend school, Michiel spends his days running urgent errands on his bicycle, avoiding Allied bombers and German soldiers alike. Then one day, his friendship with Dirk, the neighbor’s older son and a member of the secret underground, involves him in the care of a wounded British pilot. When a German soldier is found murdered and the townspeople are blamed for his death, Michiel’s already-risky mission turns life-threatening. Winter in Wartime is a fast-paced and exciting novel, which has never been out of print in the Netherlands since it was first published, nearly fifty years ago. Based on the author’s own boyhood in wartime Holland, the action and adventure of Michiel’s mission makes for a gripping read, while the anguish of his experience underscores the ultimate anti-war tenor of the novel.