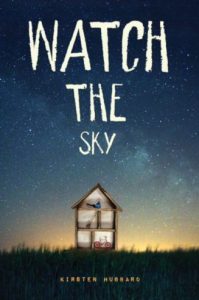 When sixth-grader Jory begins to explore the world outside of his reclusive family, he is torn between the strong beliefs of his war veteran stepfather and his newly realized desire to make his own choices. “The signs are everywhere,” Jory’s stepfather, Caleb, says. Red leaves in the springtime. Pages torn from a library book. All the fish in an aquarium facing the same way. A cracked egg with twin yolks. Everywhere and anywhere. And because of them, Jory’s life is far from ordinary. He must follow a very specific set of rules: don’t trust anyone outside the family, have your work boots at the ready just in case, and always watch out for the signs. The end is coming and they must be prepared. School is Jory’s only escape from Caleb’s tight grasp, and with the help of some new friends, he begins to explore a world beyond his family’s farm. But just as Jory’s friendships blossom, Caleb notifies the family that the time has come for final preparations. They begin an exhausting schedule digging a mysterious tunnel in anticipation of the disaster. But as the hole gets deeper, so does the family’s doubt about whether Caleb’s prophecy is true. When the stark reality of Caleb’s plans becomes clear, Jory must make a willful decision: Live his own life regardless of the consequences or follow Caleb’s orders.