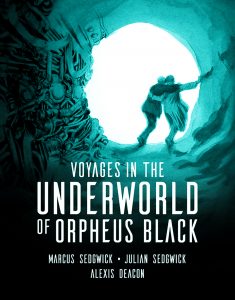 Voyages in the Underworld of Orpheus Black

by Marcus Sedgwick and Julian Sedgwick

Brothers Marcus and Julian Sedgwick team up to pen this haunting tale of another pair of brothers, caught between life and death in World War II. Harry Black, a conscientious objector, artist, and firefighter battling the blazes of German bombing in London in 1944, wakes in the hospital to news that his soldier brother, Ellis, has been killed. In the delirium of his wounded state, Harry’s mind begins to blur the distinctions between the reality of war-torn London, the fiction of his unpublished sci-fi novel, and the myth of Orpheus and Eurydice. Driven by visions of Ellis still alive and a sense of poetic inevitability, Harry sets off on a search for his brother that will lead him deep into the city’s Underworld. With otherworldly paintings by Alexis Deacon depicting Harry’s surreal descent further into the depths of hell, this eerily beautiful blend of prose, verse, and illustration delves into love, loyalty, and the unbreakable bonds of brotherhood as it builds to a fierce indictment of mechanized warfare.