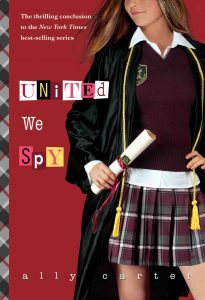 The Gallagher Girls fight to the finish in the finale of Ally Carter’s New York Times best-selling series. Who won’t survive to graduation?

Cammie Morgan has lost her father and her memory, but in the heart-pounding conclusion to the best-selling Gallagher Girls series, she finds her greatest mission yet. Cammie and her friends finally know why the terrorist organization called the Circle of Cavan has been hunting her. Now the spy girls and Zach must track down the Circle’s elite members to stop them before they implement a master plan that will change Cammie—and her country—forever.

Get ready for the Gallagher Girls’ most astounding adventure yet as Ally Carter’s New York Times best-selling series comes to breathtaking conclusion that will have readers racing to the last page.