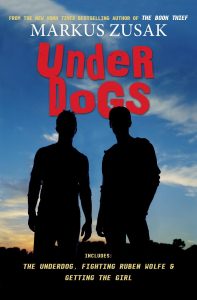 Before The Book Thief, Markus Zusak wrote a trilogy of novels about the Wolfe brothers: The Underdog, Fighting Ruben Wolfe, and Getting the Girl. Cameron and Ruben Wolfe are champions at getting into fights, coming up with half-baked schemes, and generally disappointing girls, their parents, and their much more motivated older siblings. They’re intensely loyal to each other, brothers at their best and at their very worst. But when Cameron falls head over heels for Ruben’s girlfriend, the strength of their bond is tested to its breaking point. We’re proud to present these novels together for the first time, and to be introducing American readers to The Underdog, never before published in the United States. Fans of The Book Thief won’t want to miss reading the novels that launched Markus Zusak’s stellar career.