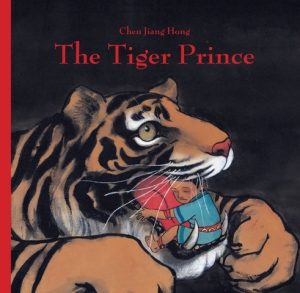 Deep in the Great Forest, a tigress is mourning the death of her tiger babies who have been killed by hunters. Seeking revenge, she attacks the villages, destroying houses and prompting the king to gather his army. But a seer named Lao Lao warns the king that if he angers the tigress further she will destroy the kingdom. Lao Lao counsels the king to give his own son to the tigress and promises that no harm will come to the boy. The next morning, the king brings the prince to the edge of the Great Forest and tells him, “Now you must go on alone.” To end the war between man and animal, the prince must forget his human ways and begin to learn what tigers know. The Tiger Prince was inspired by The Tigress, a late Shang dynasty bronze vessel in the Cernuschi Museum in Paris depicting a scene from the Chinese folktale of a baby raised by a tigress.