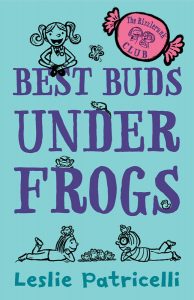 For Lily, it’s the worst first day of school ever. Who would want to be friends with the new girl, whose debut act is to throw up on the playground (on somebody’s shoes!)? Fortunately, quirky Darby comes to the rescue. Darby likes frogs and candy and oddball stuff, and soon she and Lily have formed their own club — the Rizzlerunk Club. But before you can say “BFF,” Darby’s former best friend, mean-spirited Jill — who had moved to London — returns unexpectedly. Can Lily and Darby’s friendship survive the British invasion? Peppered with charming illustrations and hilarious mishaps involving “conjoined” frogs, accidentally shaved eyebrows, and school pranks gone awry, this engaging tale of fourth-grade life will have readers wishing they could join the Rizzlerunk Club for real. In her first novel, illustrated in her inimitable style, Leslie Patricelli hits all the humorous ups and downs of being the new kid at school, navigating complicated friendships, and standing up to frenemies.SaveSave