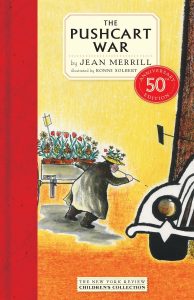 The pushcarts have come up with a brilliant strategy that will surely let the hot air out of their enemies. The secret weapon: a peashooter armed with a pin. The target: the vulnerable truck tires. Once the source of the flat tires is discovered, the children of the city joyfully join in with their own pin peashooters. The pushcarts have won one battle, but can they win the war against a corrupt mayor who taxes the pins and prohibits the sale of dried peas?