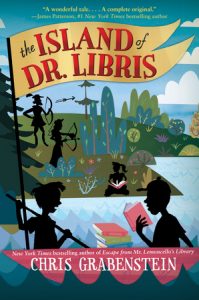 The Island of Dr. Libris

Chris Grabenstein, the NEW YORK TIMES BESTSELLING author of Escape from Mr. Lemoncello’s Library, is back with a new magical adventure–just right for for anyone who’s ever wished their favorite stories were real!

Twelve-year-old Billy Gillfoyle’s stuck spending the entire summer in an old lakeside cabin, owned by the enigmatic Dr. Libris. There’s something odd about this place, maybe even a little spooky. Strangest of all is Dr. Libris’s dusty study, full of the wildest stories Billy’s ever read: Hercules’s most dangerous battles, Robin Hood’s greatest escapes, and many more. And whenever Billy opens the books in Dr. Libris’s study, he swears he can hear strange sounds coming from the mysterious island in the middle of the lake. Almost as if the characters in the stories are calling . . . Almost as if they’re coming to life!

In this action packed follow-up to his critically-acclaimed ESCAPE FROM MR. LEMONCELLO’S LIBRARY, Chris Grabenstein has created a fast paced page turner featuring literary heroes, a video game monster known as the Space Lizard and more–all mixed together in a rip-roaring tale celebrating the power of imagination and the written word.