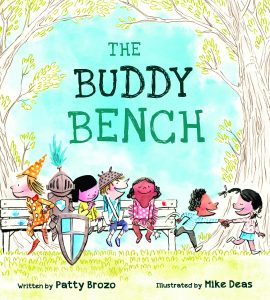 The way a schoolyard should be.
Patty Brozo’s cast of kids brings a playground to raucous life, and Mike Deas’s illustrations invest their games with imaginary planes to fly, dragons to tame, and elephants to ride. And these kids match their imaginations with empathy, identifying and swooping up the lonely among them. Having seen what being left out is like, they become agents of change, convincing their teacher to let them build a buddy bench.
Buddy benches are appearing in schoolyards around the country. Introduced from Germany in 2014, the concept is simple: When a child sits on the bench, it’s a signal to other kids to ask him or her to play. A school playground can be a solitary place for a kid without playmates; in one survey, 80 percent of 8- to 10-year-old respondents described being lonely at some point during a school day.