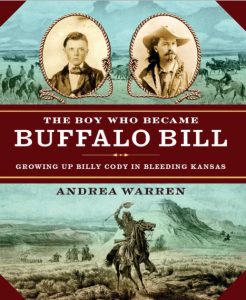 The Boy Who Became Buffalo Bill

The greatest entertainer of his era, Buffalo Bill was the founder and star of the legendary show that featured cowboys, Indians, trick riding, and sharpshooters. But long before stardom, Buffalo Bill—born Billy Cody—had to grow up fast. While homesteading in Kansas just before the Civil War, his family was caught up in the conflict with neighboring Missouri over whether Kansas would enter the Union as a free or slave state. To support his family after a pro-slaver killed his father, Billy—then eleven—herded cattle, worked on wagon trains, and rode the Pony Express. As the violence in Bleeding Kansas escalated, he joined the infamous Jayhawkers, seeking revenge on Missouri.