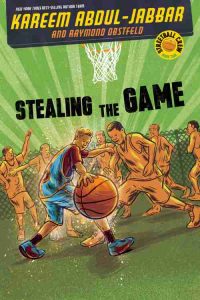 This companion to SASQUATCH IN THE PAINT combines sports action and suspense in a story about what happens when a boy’s role model starts “breaking bad.”

Chris Richards has always looked up to Jax, his older brother and his parents’ “golden child.” Lately, though, Jax has been full of surprises. First he dropped out of law school; then he started hanging out with some shifty-looking friends. One day Jax asks Chris to recruit his best middle school teammates for a pick-up basketball game in the park. Chris doesn’t think much of it until the wrong team wins and Jax goes ballistic. It turns out that Jax bet on the game, hoping to earn enough money to repay a debt to someone who doesn’t forgive easily. While Chris tries to walk a thin tightrope between helping his brother and staying out of trouble, his friend Theo does some behind-the-scenes detective work to learn what Jax has been up to. The day Chris is roped into a police investigation is the day he realizes he made the wrong play.