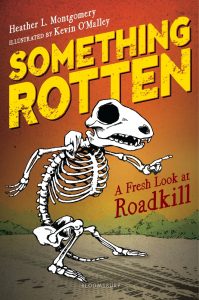 Something Rotten: A Fresh Look at Roadkill

A completely gross and totally compelling book about the author’s journey to understand roadkill—perfect for fans of Georgia Bragg.

When Heather L. Montgomery sees a rattlesnake flattened on the side of the road, her first instinct is to pick it up and dissect it–she’s always wanted to see how a snake’s fangs retract when they close their mouths, and it’s not exactly safe to poke around in a live reptile’s mouth. A wildlife researcher with a special penchant for the animals that litter the roadways, Heather isn’t satisfied with dissecting just one snake. Her fascination with roadkill sets her off on a journey from her own backyard and the roadways of the American South to scientists and kids in labs and homes across the globe. From biologists who use the corpses of Tasmanian devils to investigate cures for a contagious cancer, to a scientist who discovered a whole new species of bird from a single wing left behind, to a boy rebuilding animal bodies from the bones up, to a restaurant that serves up animal remnants, Heather discovers that death is just the beginning for these creatures. This engaging narrative nonfiction is an eye-opening and irreverent look at the dead and dying animals that we pass by without a second thought–as well as a fascinating insight to the scientific research process.