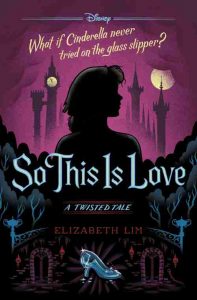 So This is Love

What if Cinderella never tried on the glass slipper? Unable to prove that she’s the missing princess, and unable to bear life under Lady Tremaine any longer, Cinderella attempts a fresh start, looking for work at the palace as a seamstress. But when the Grand Duke appoints her to serve under the king’s visiting sister, Cinderella becomes witness to a grand conspiracy to take the king—and the prince—out of power, as well as a longstanding prejudice against fairies, including Cinderella’s own Fairy Godmother. Faced with questions of love and loyalty to the kingdom, Cinderella must find a way to stop the villains of past and present . . . before it’s too late.