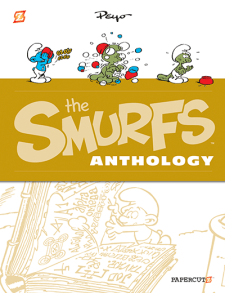 Re-presenting The Smurfs graphic novels in the order they were originally published in Europe, and at the same size. THE SMURFS APPRENTICE tells the tale of an over-zealous Smurf who craved the magical power that Papa Smurf cautiously uses for the good of all Smurfs. Yes, a Smurf learns the hard way that with great power must also come great responsibility. Plus, somehow one of the original Smurfs graphic novels was skipped over by THE SMURFS Papercutz on-going series—“Smurferies,” which consisted of a collection of one page Smurf stories. This volume of THE SMURFS ANTHOLOGY will be the first times these “Smurferies” comics are published in the United States. Also, published in the US for the very first time, the Johan and Peewit adventure, guest-starring the Smurfs, “Maltrochu’s Spell.” This one has it all—comedy, adventure, and romance! That’s right—romance! In true fairy tale fashion, an evil Lord, Maltrochu, has turned the beautiful princess’s beloved into a dog, so that he can have her hand in marriage and her father’s kingdom too! Fortunately, Johan, Peewit, and the Smurfs will not stop until the foil Maltrochu’s wicked scheme.