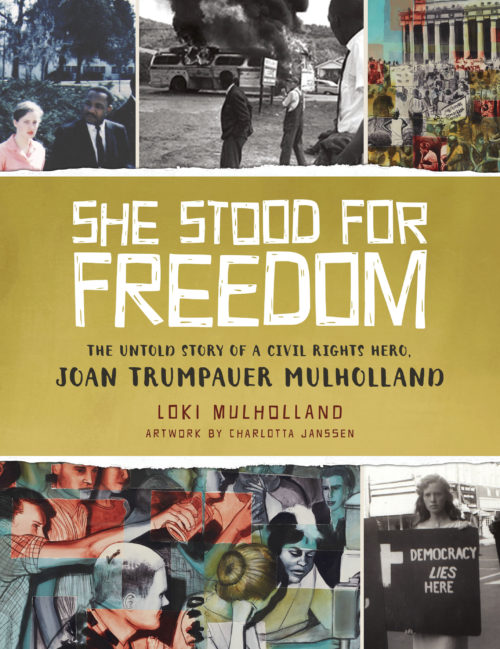 She Stood for Freedom : The Untold Story of a Civil Rights Hero, Joan Trumpauer Mulholland

Joan Trumpauer Mulholland was a white teenager in the South during Segregation who put herself on the front lines of the Civil Rights struggle. This is the first biography about her experiences, published simultaneously in picture book and middle grade editions, detailing the many events she participated in. She attended demonstrations and sit-ins and was one of the Freedom Riders in 1961 who was arrested and put on death row for months at the notorious Parchman Penitentiary. She was the first white person to join in the 1963 Woolworth’s lunch counter sit-ins in Jackson, Mississippi, and that same year participated in the March on Washington with Dr. Martin Luther King and the Selma to Montgomery march in 1965 which contributed to the passage of the landmark Voting Rights Act that year. Her willingness to stand up for justice has been an inspiration, “Anyone can make a difference. It doesn’t matter how old or young you are. Find a problem, get some friends together, and go fix it. Remember, you don’t have to change the world . . . just change your world.”

The edition for readers ages 8 and older uses collage art and blends photographs from the period with the text, and features sidebar commentary from Joan, reflecting on those years. It also includes riveting primary source documents from Joan’s personal archives like the letter sent to Joan’s mother during Joan’s arrest at Parchman Penitentiary. On official letterhead of the state, the warden exhibits the deep racism of the time by admonishing her mother for permitting a “white minor girl to gang up with a bunch of Negro bucks and white hoodlums.” This edition of She Stood for Freedom unforgettably and insightfully conveys the turmoil and tone of the Civil Rights era.