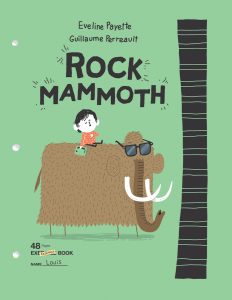 Louis has to do an oral presentation on his pet. To everyone’s great surprise, he decides to present his mammoth. Even more surprising, he talks to the class about a new species of hairy Elephantidae only recently discovered: the Rock Mammoth. This proud ancestor of the hairy musicians of the ’70s didn’t actually disappear. In fact, these elephants had had enough of being rock stars and wished for a more tranquil life. So they decided to remain hidden during the last millennia. But now Louis, the great mammoth enthusiast and rigorous scientific apprentice, has discovered this well-kept secret and is ready to reveal it to the world.