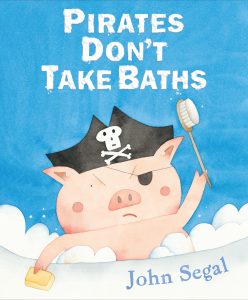 For any young child (or pig), there are few things more excruciating, more traumatic, more torturous than bathtime. And this little pig is putting his hoof down. No. More. BATHS. But how can he possibly accomplish this? Well, by being someone else, of course. After all, everyone knows that pirates, astronauts, and knights in shining armor-just to name a few-never, EVER take baths. Now if only he can convince his mother . . .

In his hilarious new picture book that is sure to become an integral part of bathtime routines, John Segal documents one particular skirmish in this never-ending battle of wills.