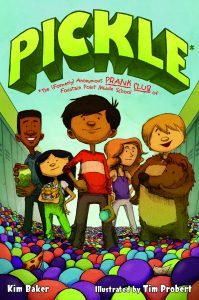 by Kim Baker
This is the story of THE LEAGUE OF PICKLEMAKERS
Ben: who began it all by sneaking in one night and filling homeroom with ball-pit balls.
Frank: who figured out that an official club, say a pickle-making club, could receive funding from the PTA.
Oliver: Who once convinced half of the class that his real parents had found him and he was going to live in a submarine.
Bean: Who wasn’t exactly invited, but her parents own a costume shop, which comes in handy if you want to dress up like a giant squirrel and try to scare people at the zoo.
TOGETHER, they are an unstoppable prank-pulling force, and Fountain Point Middle School will never be the same.