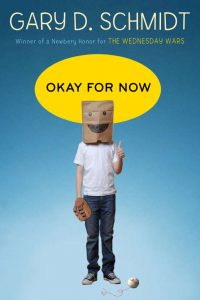 As a fourteen-year-old who just moved to a new town, with no friends and a louse for an older brother, Doug Swieteck has all the stats stacked against him. So begins a coming-of-age masterwork full of equal parts comedy and tragedy from Newbery Honor winner Gary D. Schmidt. As Doug struggles to be more than the “skinny thug” that his teachers and the police think him to be, he finds an unlikely ally in Lil Spicer—a fiery young lady who smelled like daisies would smell if they were growing in a big field under a clearing sky after a rain. In Lil, Doug finds the strength to endure an abusive father, the suspicions of a whole town, and the return of his oldest brother, forever scarred, from Vietnam. Together, they find a safe haven in the local library, inspiration in learning about the plates of John James Audubon’s birds, and a hilarious adventure on a Broadway stage. In this stunning novel, Schmidt expertly weaves multiple themes of loss and recovery in a story teeming with distinctive, unusual characters and invaluable lessons about love, creativity, and survival.