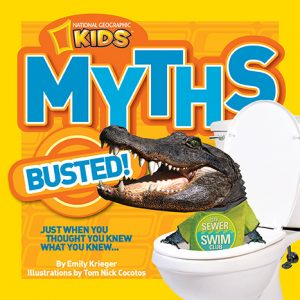 Did you know fortune cookies aren’t even found in China? Or that alligators don’t actually live in the sewers of New York City? Want to prove it to your friends? This book gives kids the tools to break and bust wild and wacky myths from around the world. These myths reveal a broad range of historical and scientific truths that keep kids learning while interacting with their favorite fictional “facts.”

Chock full of colorful photographs and funny text, this book includes hundreds of fascinating facts and interesting tidbits that prove you can’t believe everything you’re told. Each busted myth also features an explanation of where it originated, which uncovers often surprising historical significance. So next time someone tells you that the average person accidentally ingests 8 spiders each year–don’t tell them that if they believe that they are as dumb as an ox–because oxen are actually quite smart.