Home > Readers > Reading Lists > My Brilliant Idea (And How… 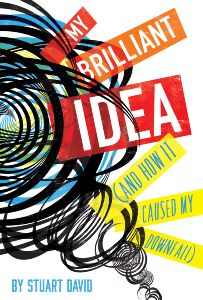 My Brilliant Idea (And How It Caused My Downfall)

Meet fifteen-year-old Jack “The Jackdaw” Dawson, a young man with a serious plan. Daydreaming in class one day, Jack gets an idea he knows can’t fail: an app that stops you from daydreaming in class. (Ahem . . . ) Fame, glory, and tons of money seem just around the corner. But Jack runs into some trouble, and suddenly this sure thing doesn’t seem quite so sure.

Ricocheting from the absurd to the profound in his first book for teens, Stuart David uses his extraordinary intelligence and wit to tell the story of a boy trying to scheme his way out from under the weight of his parents’ expectations. Readers will root for The Jackdaw from beginning to end.