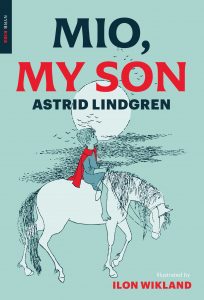 Nine-year-old Karl Anders Nilsson is the unwelcome foster child of an uncaring couple. Lonely and neglected, he yearns for simple things, things that many children already have: a warm and loving home of his own, someone to share his sorrows and joys with, and most important, his real father.

Then, on October 15, Karl simply disappears. Where has he gone? (Police are searching for him!) But Karl is far away from chilly Stockholm, in Farawayland, where he has found his father, who is none other than the king of that land. And now Karl faces a truly dangerous mission. Prophecies have foretold his coming for thousands of years. He, his new best friend Pompoo, and Miramis, his wonderful flying horse with a golden mane, must travel together into the darkness of Outer Land to do battle with Sir Kato, the cruel abductor of the children of Farawayland. Only a child of the royal blood can stop him…