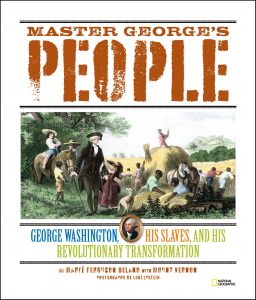 As the first President of the United States of America and the Commander in Chief who led a rebel army to victory in the Revolutionary War, George Washington was a legendary leader of men. He had high expectations of his soldiers, employees, and associates. At his Virginia plantation, Mount Vernon, his expectations of his workers were no different: “I expect such labor as they ought to render,” he wrote. Except there was a big difference. The workers who kept Mount Vernon operating were enslaved. And although Washington called them “my people,” by law they were his property. The Founders birthed a document celebrating “Life, Liberty, and the Pursuit of Happiness” as unalienable rights at the same time people were being bought and sold. But the people of Mount Vernon were so much more, and they each have compelling stories to tell. In the pages of Master George’s People, Marfé Ferguson Delano gives us fascinating portraits of cooks, overseers, valets, farm hands, and more—essential people nearly lost in the shadows of the past—interwoven with an extraordinary examination of the conscience of the Father of Our Country.