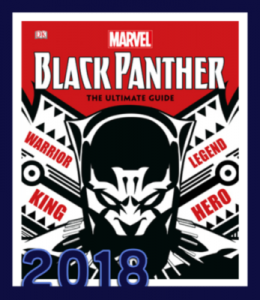 Explore the powers, weapons, technology, and suits of the warrior, monarch, scientist, and Super Hero Black Panther, king of Wakanda–from his debut in 1966 to the present.

This comprehensive book showcases stunning Black Panther comic artwork and profiles iconic characters, such as T’Challa, and his friends and allies, including Luke Cage, The Falcon, and Storm. Meet the foes, too, like Ulysses Klaw, Erik Killmonger, Doctor Doom, and Sub-Mariner.

Packed full of information about Black Panther, the book includes an in-depth look at the characters, key issues, and iconic storylines, spotlighting pivotal moments and story arcs in the history of Black Panther, including “Panther’s Rage,” “Doomwar,” and “Secret Invasion,” and “A Nation Under Our Feet.”

A must-have for fans of Black Panther comics, Marvel Comics and movies, and the Avengers.

Follows the success of other DK Ultimate Guides to the Marvel Universe, including Guardians of the Galaxy, Captain America, Spider-Man, Iron Man, Avengers, X-Men, Hulk, and Wolverine.

It is the only single volume that contains detailed reference information and an in-depth look at the key comics, characters, and themes.