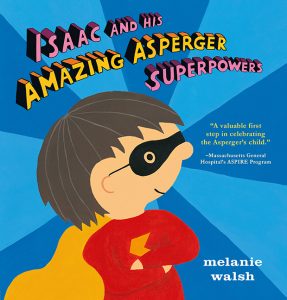 Isaac and His Amazing Asperger’s Superpowers

Isaac may look like everyone else, but he actually has superpowers that make him different from his brother and his classmates. Some kids don’t understand that and call him names. But Isaac’s superhero brain remembers loads of things, he has energy enough to bounce on his trampoline for hours, and his ears are so sharp he can even hear the buzzing some lights make in school (ouch!). He tends to say whatever comes into his head and doesn’t realize that he might hurt someone’s feelings — by telling them they have big teeth, for example! Even though he’s not really a superhero — he has Asperger syndrome, which means his brain works a little differently — he does love to play superheroes with his brother, who understands him. Straightforward and engaging, Isaac’s first-person narrative will help kids see the world through the eyes of a child with the high-cognitive type of autism spectrum disorder commonly known as Asperger syndrome.