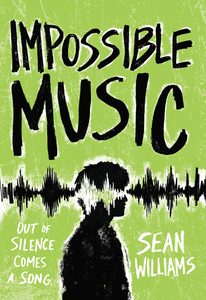 Music is Simon’s life—which is why he is devastated when a stroke destroys his hearing. He resists attempts to help him adjust to his new state, refusing to be counseled, refusing to learn sign‑language, refusing to have anything to do with Deaf culture. Refusing, that is, until he meets G, a tough‑as‑nails girl dealing with her own newly‑experienced deafness.

In an emotionally engaging tale crackling with originality, Simon’s quest to create an entirely new form of music forces him into a deeper understanding of his relationship to the hearing world, of himself, and of the girl he meets along the way.