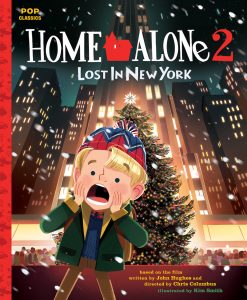 YIKES! Kevin did it again! The beloved sequel to Home Alone is now an adorable picture book for the whole family.

It’s the holidays and Kevin doesn’t want to go on his family vacation to Florida. Amid the chaos and confusion of the airport, he accidentally boards the wrong plane and ends up alone (again!) in New York City. Kevin goes sightseeing, checks into a hotel, and enjoys limo rides, all courtesy of his dad’s credit card. But then he makes a shocking discovery: the burglars who tried to rob his house last year are back, and this time they plan to rob a toy store on Christmas Eve! Can Kevin stop them and save Christmas with the help of some new friends? Charmingly illustrated by Kim Smith, this sweet and funny adaptation will delight fans of the Home Alone franchise, young and old alike.