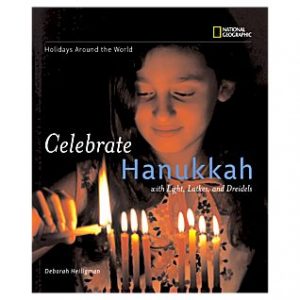 Holidays Around the World: Celebrate Hanukkah

In Celebrate Hanukkah Deborah Heiligman welcomes readers to a holiday celebrated by Jewish communities around the world.

The vivid photography of National Geographic illustrates the joyous celebrations of Jewish people around the world—including Ghana, Uganda, India, Israel, Peru, the United States and Poland, as they light menorahs, spin dreidels, and make latkes.

The richly informative back matter details many facts, such as the story of U.S. astronaut Jeffrey Hoffman, who brought a menorah and a dreidel on his Space Shuttle mission in 1993. Hoffman observed the traditional spinning of the dreidel, but wisely left the menorah unlit in the proximity of several thousand liters of rocket fuel! Also included are the author’s sure-to-please latke recipe, Hanukkah blessings, and a Hanukkah song.

A note from Rabbi Shira Stern, the book’s consultant, sets the holiday in its global religious and cultural context.