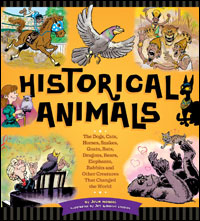 Throughout history, animals have shaped the world as we know it. But rarely have they received the recognition they deserve. Until now.

This inside look at history’s most famous animals features wacky verse, cool facts, historical stats, and zany cartoon art. Meet Alexander the Great’s horse Bucephalus, who was his battle companion for nearly thirty years. Learn about Mozart’s starling bird that helped him write music by singing along as he composed. Read about the Ethiopian goats that discovered the coffee bean, Marco Polo seeing dragons in China, and a dog named Boatswain that saved Napoleon’s life. From the cobra that killed Cleopatra to Cairo, the dog that helped hunt down Osama bin Laden, Historical Animals has these stories and more!