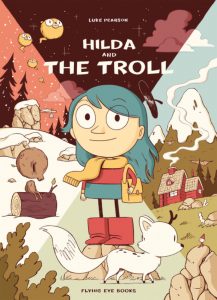 Hilda and the Troll

While on an expedition to seek out the magical creatures of the mountains around her home, Hilda spots a mountain troll. As she draws it the blue-haired explorer starts to nod of. When she wakes up, she finds herself lost in a snowstorm, and her troll has totally disappeared. On her way home, Hilda ventures deep into the woods, befriends a lonely woodman and narrowly avoids getting squashed by a lost giant.