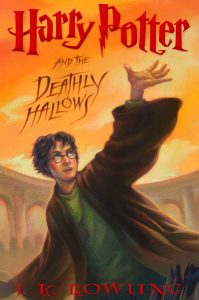 Harry Potter and the Deathly Hallows

In Harry Potter and the Deathly Hallows, the seventh and final book in the epic tale of Harry Potter, Harry and Lord Voldemort each prepare for their ultimate encounter.

Voldemort takes control of the Ministry of Magic, installs Severus Snape as headmaster at Hogwarts, and sends his Death Eaters across the country to wreak havoc and find Harry. Meanwhile, Harry, Ron, and Hermione embark on a desperate quest the length and breadth of Britain, trying to locate and destroy Voldemort’s four remaining Horcruxes, the magical objects in which he has hidden parts of his broken soul. They visit the Burrow, Grimmauld Place, the Ministry, Godric’s Hollow, Malfoy Manor, Diagon Alley…

But every time they solve one mystery, three more evolve—and not just about Voldemort, but about Dumbledore, and Harry’s own past, and three mysterious objects called the Deathly Hallows. The Hallows are literally things out of a children’s tale, which, if real, promise to make their possessor the “Master of Death;” and they ensnare Harry with their tantalizing claim of invulnerability.

It is only after a nigh-unbearable loss that he is brought back to his true purpose, and the trio returns to Hogwarts for the final breathtaking battle between the forces of good and evil. They fight the Death Eaters alongside members of the Order of the Phoenix, Dumbledore’s Army, the Weasley clan, and the full array of Hogwarts teachers and students.

Yet everything turns upon the moment the entire series has been building up to, the same meeting with which our story began: the moment when Harry and Voldemort face each other at last.