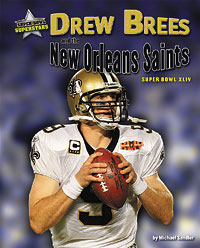 The New Orleans Saints were playing in the Super Bowl for the first time in the team’s 43-year history. A Super Bowl win would mean a lot to the people of New Orleans, who were still rebuilding their city from the damage caused by Hurricane Katrina. Quarterback Drew Brees knew he would have to play the game of his life to defeat his powerful opponent, the Indianapolis Colts. With Saints fans counting on him, could Drew lead his team to victory?

In Drew Brees and the New Orleans Saints: Super Bowl XLIV, young sports fans will follow Drew from his childhood in Texas, through his college years at Purdue, all the way to his NFL championship season. Full-color action photos and engaging play-by-play narratives will keep readers on the edge of their seats as they cheer on Drew and the Saints.