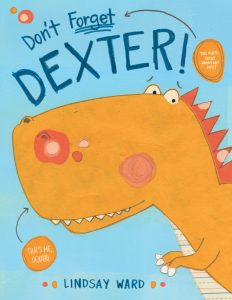 Introducing Dexter T. Rexter, the toughest, coolest dinosaur ever. At least he likes to think so.
When his best friend, Jack, leaves him behind at the doctor’s office, Dexter T. Rexter panics. First he tries to find Jack. Then he sings their special song. Then he sings their special song even louder. But when Jack still doesn’t appear, Dexter starts to wonder. What if he’s being replaced by another toy? It can’t be—after all, he can STOMP, RAWR, and CHOMP! Right? Right?! This hilariously neurotic dinosaur will do whatever it takes to get his friend back—even asking the reader’s advice—in this first book of a brand-new series.