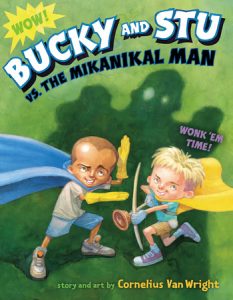 Bucky and Stu vs. the Mikanikal Man

It’s the adventure of a lifetime when best friends—and self-proclaimed superheroes—defeat bad guys of their own invention.
It’s wonk ’em time when Bucky and Stu have to stand up to Phat Tyre, TrashMan and Hose-Nose. No matter that the bad guys are all made out of household items that Bucky and Stu have assembled themselves—these bad guys don’t stand a chance against the boys’ power moves. Still, it’s quite a surprise when their latest villain, the giant Mikanikal Man, gets zapped during a lightning storm and comes to life! The battle—and thrill—of a lifetime ensue. Full of surprises and laughs, this upbeat, action-packed story celebrates imagination, creativity, and friendship in even the most unexpected forms. Cornelius Van Wright’s hilarious illustrations are full of surprises and are perfect for portraying the high-speed antics of two enthusiastic boys.