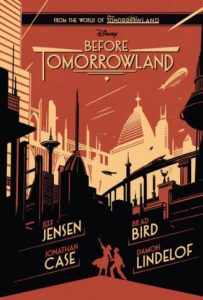 by Jeff Jensen and Jonathan Case

The story begins in the year 1939, when a secret society of extraordinary geniuses is about to reveal an incredible discovery with the world. But a misguided enemy–half man, half machine–will stop at nothing to prevent the group from giving this forbidden knowledge to humanity. Meanwhile, a mother and son on vacation in New York City are handed a comic book infused with a secret code that will lead them straight into the crossfires of the conspiracy. Filled with action and adventure, BEFORE TOMORROWLAND will show the origins of how Tomorrowland came to be. The book will also feature a 20-page full color comic insert, bringing to life the comic that plays an integral role in the story.