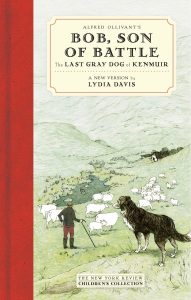 by Alfred Ollivant, in a new version by Lydia Davis

Bob, Son of Battle, is a sheepdog so canny and careful of his flock, so deeply devoted to his master, James Moore, and so admired for his poise and wisdom by the residents of a small village in the rugged mountains of England’s North Country, that young though he is, he is already known as Owd Bob. In a recent contest, Bob has proved himself a matchless sheepdog, and if he wins the trophy two more times, he’ll be seen as equal to the legendary sheepdogs of yore.

But Bob has a real rival: Red Wull, with his docked tail and bristling yellow fur, a ferocious creature, just like his diminutive master, Adam McAdam, a lonely Scot, estranged not only from his English neighbors but from his son, David. McAdam just can’t stop belittling this strapping young man, all the more so since David began courting Moore’s beautiful daughter Maggie. But what McAdam really wants is for his beloved Wullie to wrest the prize from Bob once and for all.

The story takes a darker turn when a troubling new threat to the local flocks emerges. A dog has gone rogue, sneaking out at night to feast on the flesh and blood of the sheep he is bound to protect. Again and again, new sheep fall prey to this relentless predator; again and again, he slips away undetected. This master hunter can only be among the boldest and sharpest of dogs . . .

Bob, Son of Battle has long been a beloved classic of children’s literature both in America and in England. Here the celebrated author and translator Lydia Davis, who first read and loved this exciting story as a child, has rendered the challenging idioms of the original into fluent and graceful English of our day, making this tale of rival dogs and rival families and the shadowy terrain between Good and Bad accessible and appealing to readers of all ages.