January 18, 2023Every Child a Reader, On Our Radar, Uncategorized 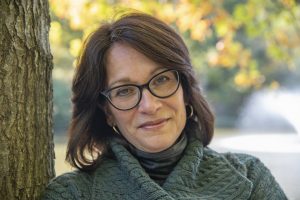 The Library of Congress and Every Child a Reader today announced the appointment of Meg Medina as the eighth National Ambassador for Young People’s Literature for 2023- 2024.

Medina’s books examine how culture and identity intersect through the eyes of young people. Her middle-grade novel Merci Suárez Changes Gears, the first of three books in a trilogy about the Suárez family, received the 2019 Newbery Medal and was named a notable children’s book of the year by the New York Times Book Review. Her most recent picture book, Evelyn Del Rey Is Moving Away, received multiple honors, including the 2021-2022 Charlotte Zolotow Award. Raised in Queens, New York, Medina now lives with her family in Richmond, Virginia.

For her two-year term as National Ambassador for Young People’s Literature, Medina will engage readers across the country through her new platform ¡Cuéntame!: Let’s talk books. Inspired by the Spanish phrase that friends and families use when catching up with one another, ¡Cuéntame! encourages connection among families, classrooms, libraries and communities by talking about books—both books that reflect the readers’ lived experiences and those that expose readers to new perspectives.

“It’s an enormous honor to advocate for the reading and writing lives of our nation’s children and families,” Medina said. “I realize the responsibility is critical, but with the fine examples of previous ambassadors to guide me, I am eager to get started on my vision for this important work. More than anything, I want to make reading and story- sharing something that happens beyond classroom and library walls. I want to tap into books and stories as part of everyday life, with all of us coming to the table to share the tales that speak to us and that broaden our understanding of one another.”

As National Ambassador, Medina will encourage families and young people to build relationships with their local libraries, and will create materials to introduce and connect readers with authors across a range of styles and genres. During in-person visits with students, Medina will discuss her work and host “book talks” with kids. Medina believes that when we talk about the books we enjoy with others, we share who we are as thinkers, as readers and as people in our families and communities.

Librarian of Congress Carla Hayden will inaugurate Medina as the new National Ambassador for Young People’s Literature on Tuesday, Jan. 24 at 10:30 a.m. Jason Reynolds, the 2020-2022 National Ambassador, and local school groups will be in attendance to welcome Medina into her new role. The event will be livestreamed on the Library’s YouTube page.

“I am delighted Meg Medina will serve as the next National Ambassador for Young People’s Literature,” said Librarian of Congress Carla Hayden. “Meg’s warmth and openness, coupled with her long-running commitment to young readers, libraries and librarians, is extraordinary. I look forward to the ways she will invite young people — especially Spanish and bilingual speakers — to share their favorite books and stories.”

“We couldn’t be more pleased with the selection of Meg Medina as the next ambassador,” said Carl Lennertz, executive director of Every Child a Reader and the Children’s Book Council. “She will inspire young people of all ages over the next two years with her energy, ideas and passion for reading and storytelling.”

As the world’s largest library — one uniquely charged with the development and preservation of civic, intellectual and creative vigor — programs such as the National Ambassador for Young People’s Literature promote the Library of Congress’ real-world engagement and commitment to readers in America.

The National Ambassador for Young People’s Literature is selected for their contributions to young people’s literature, the ability to relate to children and teens and dedication to fostering children’s literacy in all forms. The selection, made by the Librarian of Congress, is based on nominations from a diverse pool of distinguished professionals in the children’s publishing field and from an independent selection committee comprising educators, librarians, booksellers and children’s literature experts.

Members of the 2023-2024 selection committee for the National Ambassador for Young People’s Literature include:

About the National Ambassador for Young People’s Literature
The National Ambassador for Young People’s Literature is an initiative of the Library of Congress, in partnership with Every Child a Reader, with generous support from The Library of Congress James Madison Council, The Capital Group Companies Charitable Foundation and Dollar General Literacy Foundation.The program was established in 2008 by the Library, the Children’s Book Council and Every Child a Reader to emphasize the importance of young people’s literature as it relates to lifelong literacy, education and the development and betterment of the lives of young people.Previous National Ambassadors include authors Jon Scieszka (2008–2009), Katherine Paterson (2010–2011), Walter Dean Myers (2012–2013), Kate DiCamillo (2014–2015), Gene Luen Yang (2016–2017), Jacqueline Woodson (2018–2019) and Jason Reynolds (2020-2022).

About Meg Medina
Meg Medina is the author of the Newbery Medal–winning book Merci Suárez Changes Gears, which was followed by two more acclaimed books about the Suárez family: Merci Suárez Can’t Dance and Merci Suárez Plays It Cool. Her young adult novels include Yaqui Delgado Wants to Kick Your Ass, which won the 2014 Pura Belpré Author Award and will be published in 2023 as a graphic novel illustrated by Mel Valentine Vargas; Burn Baby Burn, which was long-listed for the National Book Award; and The Girl Who Could Silence the Wind. She is also the author of picture books Evelyn Del Rey Is Moving Away, illustrated by Sonia Sánchez, Jumpstart’s 2020 Read for the Record selection; Mango, Abuela, and Me, illustrated by Angela Dominguez, which was a Pura Belpré Author Award Honor Book; and Tía Isa Wants a Car, illustrated by Claudio Muñoz, which won the Ezra Jack Keats New Writer Award; and the biography for young readers She Persisted: Sonia Sotomayor. The daughter of Cuban immigrants, she grew up in Queens, New York, and now lives in Richmond, Virginia. Visit her online at megmedina.com.

About Every Child a Reader
Every Child a Reader is a 501(c)(3) award-winning literacy charity whose popular national programs include Children’s Book Week, the longest-running literacy initiative in the country, celebrating 104 years in 2023; the Kids’ Book Choice Awards, the only national book awards chosen solely by children and teens; Get Caught Reading, a classroom poster project; and the National Ambassador for Young People’s Literature program, in partnership with the Library of Congress.

About the Library of Congress
The Library of Congress is the world’s largest library, offering access to the creative record of the United States — and extensive materials from around the world — both on-site and online. It is the main research arm of the U.S. Congress and the home of the U.S. Copyright Office. Explore collections, reference services and other programs and plan a visit at loc.gov; access the official site for U.S. federal legislative information at congress.gov; and register creative works of authorship at copyright.gov.