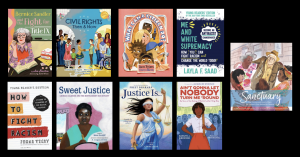 Martin Luther King Jr. Day is the only federal holiday designated as a National Day of Service to encourage all Americans to volunteer to improve their communities. During the last quarter century, the MLK Day of Service has grown, and its impact increased as more Americans embraced the idea that citizenship involves taking an active role in improving communities.

Here are 9 children’s books about how young people have done and can continue to do good deeds in their communities and the world at large.

Racism and social justice are important topics kids are dealing with today. In this adaptation of How to Fight Racism for young readers ages 8-12, Dr. Jemar Tisby helps kids understand how everyday prejudice affects them and what they can do to create social change. Inside, he explains the history of racism in America and why it is so prevalent, as well as uses Christian principles to provide practical tools and advice kids can use to develop and maintain an anti-racist mindset and make a positive difference in the world.

Before Kip Tiernan came along, the US had no shelters for women. Here is the inspirational story of a singular woman and what her vision and compassion have brought to life.

“Justice is not three hots and a cot. Justice is having your own key.” —Kip Tiernan

When Kip Tiernan was growing up during the Great Depression, she’d help her granny feed the men who came to their door asking for help. As Kip grew older, and as she continued to serve food to hungry people, she noticed something peculiar: huddled at the back of serving lines were women dressed as men. At the time, it was believed that there were no women experiencing homelessness. And yet Kip would see women sleeping on park benches and searching for food in trash cans. Kip decided to open the first shelter for women—a shelter with no questions asked, no required chores, just good meals and warm beds. With persistence, Kip took on the city of Boston in her quest to open Rosie’s Place, our nation’s first shelter for women.

Christine McDonnell, a former educator at Rosie’s Place, and illustrator Victoria Tentler-Krylov bring warmth to Kip Tiernan’s story of humanity and tenacity, showing readers how one person’s dream can make a huge difference, and small acts of kindness can lead to great things.

Introduce the concept of justice to young people with this picture book by The New York Times bestselling author of Doing Justice, Preet Bharara.

In clear and simple language, Preet Bharara, former U.S. Attorney for the Southern District of New York, explains what justice is and what it takes to achieve it for even the youngest readers. Drawing on examples of historic justice seekers whose deeds best demonstrate those attributes by asking hard questions, keeping an open mind, defending the truth, and using their voices and their bodies to fight injustice—such as Ida B. Wells, John Lewis, Malala Yousafzai, and many others, this timely book is perfect for exploring the concept of justice. Inspire young readers to fight for justice in their world and to remain hopeful that by standing together, it can triumph.

“How do we give young people the tools they need to actively dismantle racism and create a better world for everyone? From the author of the groundbreaking The New York Times bestselling, Me and White Supremacy, Layla Saad’s young readers’ edition is a timely, crucial, and empowering guide for today’s youth on how to be antiracist change makers.

Layla Saad meticulously updated the content for young readers to include:

-definitions and history of various topics covered
-sections to help readers process complex topics
-no time limit—unlike the adult edition, this is not a 28-day challenge so readers can use this -content for however long it takes to do the work
-content that is approachable and applicable for those with and without white privilege

Me and White Supremacy has reached so many adults in their journeys to become better ancestors. This edition aims to teach readers how to explore and understand racism and white supremacy and how young readers can do their part to help change the world. Covering topics such as white privilege, white fragility, racist stereotypes, cultural appropriation, and more, Layla Saad has developed a brilliant introduction and deep dive that is sure to become a standard in antiracist education.”

Ain’t Gonna Let Nobody Turn Me ‘Round is a deeply moving middle grade memoir about what it means to be an everyday activist and foot solider for racial justice, as Kathlyn recounts how, drawn to activism from childhood, she went from attending protests as a teenager to fighting for Martin Luther King, Jr.’s birthday to become a national holiday as an adult. A blueprint for kids starting down their own paths to civic awareness, it shows life beyond protests and details the sustained time, passion, and energy it takes to turn an idea into a law. Deftly weaving together monumental historical events with a heartfelt coming-of-age story and in-depth information on law-making, Ain’t Gonna Let Nobody Turn Me ‘Round is the perfect engaging example of how history can help inform the present.

Civil Rights Then and Now: A Timeline of the Fight for Equality in America doubles as a Civil Rights Movement guide and Black history book for kids. It’s a tool for resourceful parents and educators who aim to engage youth on topics of racism, discrimination, social justice, and prejudice from a historical perspective to the modern present day.

Civil Rights Then and Now presents readers with facts, biographies of historical Black people, modern historical black figures such as Black activists, landmark supreme court cases, and historical events in a digestible manner and within a historical context. It also provides context for the modern civil rights movement, tackling subjects like racism and Black Lives Matter for kids to understand the present and future of the social justice movement.

An inspiring picture-book biography about the woman whose cooking helped feed and fund the Montgomery bus boycott of 1956, from an award-winning illustrator.

Georgia Gilmore was cooking when she heard the news Mrs. Rosa Parks had been arrested–pulled off a city bus and thrown in jail all because she wouldn’t let a white man take her seat. To protest, the radio urged everyone to stay off city buses for one day: December 5, 1955. Throughout the boycott–at Holt Street Baptist Church meetings led by a young minister named Martin Luther King, Jr.–and throughout the struggle for justice, Georgia served up her mouth-watering fried chicken, her spicy collard greens, and her sweet potato pie, eventually selling them to raise money to help the cause.

Here is the vibrant true story of a hidden figure of the civil rights movement, told in flavorful language by a picture-book master, and stunningly illustrated by a Caldecott Honor recipient and seven-time Coretta Scott King award-winning artist.

In 1969 Bernice Sandler was finishing her doctorate in education at the University of Maryland, teaching part-time at the university, and trying to secure a full-time position. Despite her excellent credentials, it became clear she wasn’t even being considered. But why? she wondered.

“Let’s face it,” a male colleague said, “you come on too strong for a woman.”

Those fateful words brought sex discrimination home for Sandler. Facing it herself, front and center in her own workplace, meant she could no longer be ambivalent about women’s rights. She could no longer buy the media coverage of feminists as “man-hating,” “abrasive,” and “unfeminine.” But what could she do? Sandler soon discovered that none of the obvious laws prohibiting discrimination covered sex discrimination in education. Sandler’s work led to the passage of Title IX—making it illegal, once and for all, for a federally funded institution to discriminate against someone based on their sex, including in education. This had a profound effect on women in the workplace, in school, and in sports.

Bernice Sandler and the Fight for Title IX drives home the message that it doesn’t take a person with power to make a difference. More often, it takes determination. When confronted with injustice, regular people can effect change. Also includes extensive backmatter about how to be an activist written in partnership with Know Your IX, a survivor- and youth-led project of Advocates for Youth that aims to empower students to end sexual and dating violence in their schools.

This is a book about what citizenship—good citizenship—means to you, and to us all: Across the course of several seemingly unrelated but ultimately connected actions by different children, we watch how kids turn a lonely island into a community—and watch a journey from what the world should be to what the world could be.

What Can a Citizen Do is an empowering and timeless read with an important message for all ages.