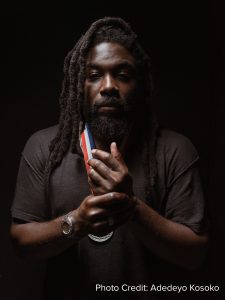 Watch Jason Reynolds as he closes his tenure as the 2020-2022 National Ambassador for Young People’s Literature.

On Tuesday, December 13, the Library of Congress hosted an event to mark the end of the third and final year of Jason Reynold’s incredible tenure as the National Ambassador for Young People’s Literature.

The National Ambassador program is run by Every Child a Reader, in partnership with the Library of Congress.

Students from local schools attended the event in the Coolidge Auditorium at the Library of Congress. Jason had a dialogue on stage with two students and then addressed the audience with emotional and humorous reflections on his journey these three years.

Then, Children’s Book Council’s Shaina Birkhead took the stage to thank Jason on behalf of everyone in the children’s publishing world and the thousands of students Jason met in person and virtually at 47 school events across 25 states over 3 years.

More about The National Ambassador for Young People’s Literature.