A Day with Jason Reynolds 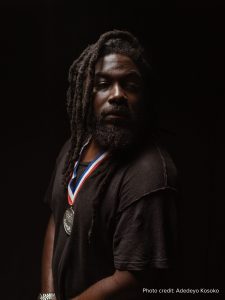 CBC’s Shaina Birkhead got to spend a day with Jason Reynolds, our current National Ambassador for Young People’s Literature, and joined him as he connected with young people.

“What do you love about it?” Jason asked me as we sat at Hunt’s Seafood Restaurant in Dothan, AL the night before his last official tour event as National Ambassador. We had been talking about the South, and Alabama in particular since that is where I am from.

I have to admit, I was nervous to meet him and his wonderful Simon & Schuster publicist, Lisa, for dinner. I have assured the students about to meet Jason on his 30 visits (virtual and in-person) these past three years, “Don’t be nervous. You can ask him anything. Jason makes everyone feel at ease.”

And yet, having not gotten to spend time with him in-person at all during his tenure, there I was wondering what we would even talk about. Unsurprisingly, all my worries were immediately put to rest. Because that is who Jason is. The kind of person who makes people want to talk. Who really listens and who makes everyone feel like they matter and that what they have to say matters. He knows what questions to ask.

Jason is also the kind of person you want to listen to. Who knows the value of his own story and his own thoughts. He is a conversationalist of the highest degree.

And so, it was with the utmost joy that I got to experience Jason in action, both one-on-one and with an auditorium full of students in Blakely, GA the next day.

In his events as the National Ambassador, Jason has visited schools online and in person in rural locations across the country to talk with kids. Each of his events has featured two student ambassadors. They ask questions. He asks questions. A conversation happens. These exchanges with students and an adult moderator are at the core of Jason’s platform as National Ambassador, GRAB THE MIC: Tell Your Story. And that platform speaks to the core of Jason.

In his 45 minutes on stage, Jason sparked an interest in stories and reading just by being himself. His genuine love for “the shorties” was on constant display. And his respect for the kids was front and center. Respect for their passions and interests, respect for the way they move through life, and respect enough to tell them some hard truths. One of my favorite moments was when Jason said that he reads an hour a day. The school librarian immediately jumped in to say, “You see, I only ask you to read 20 minutes a day!”

Of course, that elicited some groans from students, but Jason brought it back around, talking about how just that small amount of reading per day can increase their vocabulary and intellect, so they can use their mouth instead of their fists, so they can learn and grow, so they can succeed. Concrete cause and effect that students could get behind.

I could go on and on about my favorite parts of the event in that auditorium in Blakely, Georgia. In 45 minutes, a lot of inspiring things were said. I wish I had recorded it for myself. But you don’t need to record something for the event to reverberate in your life. And I could see in the excitement of the students, in the questions from the student ambassadors, in the enthusiasm of the teachers, and in the eyes of one shy young man that got to speak to Jason directly after the event, that this would reverberate in their lives, as it will in mine.

More about The National Ambassador for Young People’s Literature.